Conversation From Behind The Mask 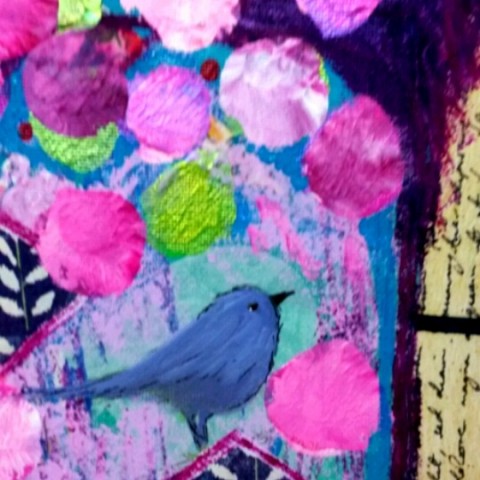 I was talking with somebody I've known for a very long time recently. Sam, told me how tired he is. How much harder life is to manage these days. How little energy he has. How much effort he has to put into the simplest things to keep going to work, to maintain friendships, to muster up any enthusiasm for even holidays ...and so his list went on.

Sam knows exercise would help but he hasn't got any energy to do anything more in his day than he really has to. He knows all the things to self help like exercise, healthy diet, relaxation, meditation, talking to supportive friends, sleeping (if only he could), taking the meds his GP prescribed and so on.

As I listened to him I turned my attention inwards. An image floated to mind of him wearing many masks; the Mask of Smiling Attentively, the Mask of Undertaking Responsible Work, the Mask of Listening Carefully with Love and Understanding, the Mask of Great Enthusiasm for Creative types who surround him. Forcing himself to be a particular way with colleagues, partner, relatives, friends leaves Sam feeling drained of every ounce of energy he possesses. There is nothing left for him.

I have observed Sam being bright, witty and loving in social and work settings. It looks so easy to him to do but I could hear how draining and depressing it was for him deep down underneath in his Real Self to keep doing and giving in this way..

As he continued to share with me, I imagined reaching over to him and gently lifting up his Masks and looking underneath at what lay deep below...

It felt inappropriate for me (in my imagination) to lift the Mask(s) and peek without his permission. Of course what would be below would simply be a projection on my part anyway, so I decided against peeking. However it felt really useful to talk about the intuitive imagery that was going on in me.

He became quite animated and filled with energy as he told me just how much effort and energy went into each of the masks he wore. After a while, Sam seemed more alive and bright. The Sam who believed he could only be loved and valued if he gave so freely, so lovingly to everyone had been seen and really lifted him out of his 'depressed' place.

Finally when he shared what it felt like to lift off the Masks he said a weight had been lifted off his shoulders and neck. They were psychololgically very heavy, weighing him down, giving him migraines, depressing his mood and zapping all the energy out of him.

It seems clear to me that Sam believes he has to forsake himself and how he really feels to be there, completely present, fully engaged and enthusiastic for 'the other'. I know we could dip deeply back here and ask who the 'other' is for Sam and possibly find that it is his 'First' Relationship with his main caregiver or other significant person however, going back and opening all of that up may make things worse when not necessary. Why load more onto Sam when he is already weighed down so heavily?

Sam's own needs are very low down on his list of priorities. Other people in his life are placed quite high up on his list - lucky them, but how very depressing for Sam.

We talked about Self Care and Self Love which seemed a really hard thing for Sam to do or have for himself.

I asked Sam to tell me about the life he really wanted to have and once again he became very animated as he shared his deepest desires of spending a year in India, the Himalayas and surrounding areas, exploring high up in clean fresh mountains and even being cut off by snow up there for half a year (perhaps to have that real break he needs?). I could almost smell the spices, see the amazing colours and look at my image in the glassy, clear lakes up in the mountains.

This really helped Sam to feel he is lovable and important. I also encouraged Sam whilst being in his partner's body during that piece of work to give Sam some advice about how much energy he pours into his relationships at home, at work and socially. This was so useful as Sam received excellent feedback and advice during this piece of work, shifting something deeply for him.

Later, Sam decided he would make a new mask, a Mask of Self Protection that he would wear for the time being, starting immediately. It will be very useful for him in the meantime. This Mask clearly shows others that as much as he loves them, he doesn't have as much energy or enthusiasm at present and is currently undertaking some important Self Care..

Underneath Sam's Mask of Self Protection is his real, sad, exhausted, drained Self who feels really low at present. He isn't ready to let many others see that Self yet however he did decide to share this Self with his partner later that day and ask for support. A big step in the right direction for Sam.

It would seem apparent to me, that the less effort and enthusiasm Sam forces from him self when he's around others will help Sam to feel less depleted. The saving of energy he makes could be spent on himself somehow.

Have you ever considered any of the Masks you might wear each day? Who with? Do you know why you need each of them (look underneath)? I would love to hear about them if you would like to share.

If you comment, your email address won't be shown, simply your name.

Thanks for visiting me here,

No comments made yet. Be the first to submit a comment

By accepting you will be accessing a service provided by a third-party external to https://www.kassimartin.com/

E: This email address is being protected from spambots. You need JavaScript enabled to view it.